Los Angeles County is home to the greatest number of Armenians outside of Armenia itself. In fact, about 214,618 Armenians live in the Los Angeles County. Armenian culture is very close to Southern Italy one. I have known Meg since many years now. We haven’t met often but we know each other through our businesses and quick chats. She has worked hard over the years achieving excellent results. Today Meg is one of the brightest Armenian business women in Los Angeles.

She moved from her hometown to United States at age of 19. At the beginning she didn’t speak English and had no idea or plan about her future yet. She referred to the Armenian community and was able to get her first job in a couple of weeks. Soon after she enrolled to an English course that allowed her to be able to find better occupation in order to save money and buy a car.

She felt like she was living the American life. She would look around and everyone was working hard to make the best out of their lives and to move forward. It took her a few years to realize that just working hard and for long time was not the way to achieve something. She thought she needed a plan. School was not for her. If she wanted to be a doctor or an engineer she only needed to follow that way but she didn’t want that. She aimed to create a small business to grow. Meg planned to find a job that she was good at and with a highest income in order to build a budget and start a business. She looked for a job that was high in demand so she would never be without a job. She chose the car

industry and it turned out she was very good at. She realized she loved it.

During 17 years of career in the car industry she has worked with several dealers reaching higher positions year after year. She begun her journey learning as much as she could about running a business.

And so she started opening several small business in order to practice what she had learned. Her first project was an art framing online business, then she dedicate herself to advertising business, later a specialty cakes project and even a vending machine business. Some got much success, some have failed, others she wasn’t passionate about. She was looking for something she was more involved in to create a continuous, productive and not boring business.

She started to feel she was doing something wrong or she missing something, so she decided to take some time off from side business focusing exclusively on her daily job. In the same time she did deeper researches and got time to think and to elaborate her thought and ideas. She realized that she was playing safe. All her business were low risk, insuring that she wouldn’t lose much. However it is known that higher risk would bring higher rewards.

Therefore Meg invested everything she had in a music rehearsal studio in Reseda, California. 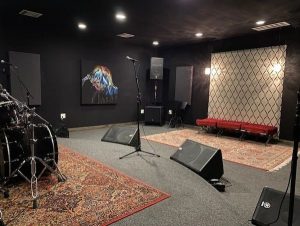 Meg quit her last car industry job after PA Rehearsal Studios became stable. Being an enthusiastic, passionate and enterprising woman, she could not resist the temptation to open a car business. Because of her passion and her confidence in this sector she decided to open a used car lot. Unfortunately the pandemic made things very bad so that it was hard keeping up with all expenses. Plus she had to close the doors to both her dealers and the also studio for several months.

MP – Actually not much of a different person, I always look for new experiences, I do get bored very easily and got to find something exiting to do all the time. I enjoy spending time with my friends, but I also love meeting new people, just feel like there’s always something new to learn from people and learning relay excites me, like I said I never saw myself going to school but I love to educate myself and learn different thing, it’s just keeps me focused and creative. –

NAP – How about PA Rehearsal studios? –

MP – PA Rehearsal Studios, became my most exciting business, with the highest rewards! It has been not easy and not fast. It took a lot of hard work and effort, as well as of sleepless nights. I had to hit the rock bottom before I was able to get the business running. –

NAP – I know you also are an artist. And very talented. Would you tell me about it? –

MP – I love to paint during my free time. As a kid I spent a lot of time painting and drawing, of course as an adult just like most of us, I got too busy for a very long time to even do a sketch. But about 10 years ago I realized that I could actually use my art as a form of therapy. Every time I would start a painting I wouldn’t think about anything else till it was done, and I would feel relax the whole time and it felt amazing, as the stress of life started to rise I started doing more and more paintings. I even did a few just for the Studio and it seems like I’m getting a lot of attention for it. Not going to lie the attention actually feels pretty good, especially when people find out I’m the only non-musician at the studio, but they say well you are an artist after all, it’s very confirming. I might plan to paint more and maybe run an art gallery just to have that experience and see what happens. – 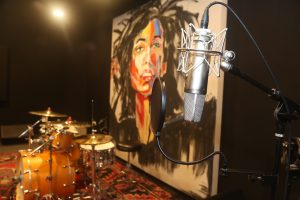 NAP – Can you briefly describe your hometown? –

MP – Well I am an Armenian. I was born in an Armenian Christian family, in Iran. I was born and raised in Tehran. It was just a very busy city with polluted air, there was not much to do there, especially as a female there was a lot restrictions and disadvantages to deal with. –

NAP – What do you miss about your hometown? –

MP – I miss the people, the warmest caring people. Everyone looked out for each other and was there to help if needed. I also miss playing in the streets as a kid, I just loved it. –

NAP – What you don’t miss about your hometown? –

MP – I really don’t miss anything about my hometown, just my friends and some family. I know it sounds bad, but it’s the truth for me, I would have never had any of the opportunities that I’ve got in United States over there. Especially being female and growing up in a lower income family. –

NAP – What is a traditional song that most

reminds you your hometown? –

MP – I am more into rock and upbeat music, and growing up that is what I mostly listened to. However growing up in a country with such reach history and culture you can’t deny the beauty and history that comes with it. Most traditional song that reminds me of my hometown. “The passion of Rumi” is one of the songs that sure takes me back to my hometown and brings a smile on my face. But here is a very interesting story about this album. In 2007 The Iranian national ensemble did a collaboration project with the NY philharmonic, they joined forces of United States and Iranian export classical musicians and they wrote this entire peace that’s 12 albums in celebration of Rumi’s 700 year birth anniversary and its all based on Rumi poetry. It was written with combination Iranian classical instruments and Western classical instrument ensemble, and they did a tour all around world and sold out every show and got a lot press. This was joyful to see how the people, Artists or musicians can come together and create a magical experience regardless if political issues and differences. –

NAP – How was the social impact abroad? –

MP – It sure was a culture shock, especially

coming from a strict Muslim country, where everything and everyone is segregated, it sure feels good but takes a little time to be comfortable and blend in. I did have my ups downs I did get bullied especially during the a few years that I lived in the east coast. But mostly I was happy and it was easy to adjust to my new life. –

MP – Armenian community in my opinion is very interesting, I don’t see us supporting each other in basic day to day business or social life, however it turned out we have the ability to become one soon as we are threatened as a nation. For example last year during the war with Azerbaijan, it was a very hard and heart breaking experience for all of us, but we allwitnessed the beauty of how we all put a side our differences and became this one strong nation that would do anything to help our country and our people during those difficult times. So to answer the question sure we absolutely support each other to the core, but as long as it’s vital to do so. –

NAP – Last November Russia brokered a ceasefire to finally bring to an end the fighting between Armenia and Azerbaijan over the disputed territory of Nagorno-Karabakh. What is really happening now? –

MP – The ceasefire is contracted and absolutely temporary. Russia sure seems like the mediator for peace here, but Russia is the reason this conflicts started to begin with. . People got thrown out of their homes, how can anyone be ok with that? Just over a century ago Armenia experienced a genocide of over one million and a half people. Did anyone do anything about it? Is anyone going to do about it? Of course not, it just happened again and the world was silent. Unfair violence happens all over the world and no one does anything about it. Look at what’s happening in Palestine. The conflict been going

on for decades just like Armenia but no one will do anything about it. These issues are deep politics that I don’t like to get involved with. It is sad and it is heartbreaking, sure it’s super upsetting to lose a part of your land, but I’m picturing all the young people that died, all the people that lost their loved ones. All the mothers that had to bury their kids or even worse, couldn’t even have a body for memorial services. I am not talking just about Armenians losing their lives, it’s also true for Turks, Palestinians, and Israelis and overall where ever there’s a war. We are basic people it does not matter the nationality or religion, no one deserves to die or loose a loved one because of some politics. People are being used and brain washed and end up killing each other in the name of their nation or religion, but all of this been strategically planned by and for very limited power players and innocent people lose their lives for it. –

MP – Now I am exclusively focusing on the studio, doing my best to take it to the next level and expand it as much as possible. I believe I like the challenge. As long as I am challenged I stay creative and I’m happy. The energy surrounding PA Rehearsal Studios is just amazing! I can listen to live music every day, meeting musicians that are excited and passionate about what they do. It’s a very happy and energetic environment. I don’t know if it would be possible to experience this kind of vibe everyday with any other business that I ever thought about. –

Help Napulitanamente to to improve by making a donation. Thanks for your support!

L’Antiquario. Hospitality, cocktails & champagne at one of the best bar in the world.

Da Alfredo. A Tasty piece of Italy in Japan.