Interview with Antonio Luise friend an the greatest collector of Diego memorabilia.

The first stop that Diego Armando Maradona made when he arrived in Napoli, in 1984,was the Luise dairy where he tasted mozzarella.Sometimes it might be gone more or less like this:

A phone call around 3 in the morning.

Diego is coming. He wants mozzarella. Salvatore gets ready and wakes up his son.

– Wake up Antonio! Let’s go and prepare some mozzarella for Diego! –

Unfortunately, because of his fame and the too much passion of the Neapolitans, the champion was forced to go out at night to have some privacy and enjoy the city like an ordinary person, he who was not. 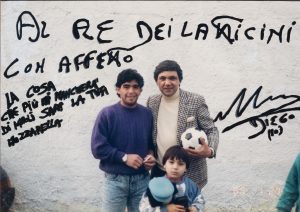 Maradona was loved, despite this both his image and his life were raped and speculated. Many people have turned away from him or have taken advantage of his good faith. Although not all of them. In this article we will talk about someone who really loved the Argentine champion, about his story and a story of friendship which brought to something extraordinary. The entrepreneur Luise from Castelvolturno, in Caserta, was a great friend of the Pibe de Oro. Both when Diego was on the crest of the wave and when he was abandoned, he has always been very close to him. They had a beautiful friendship as they loved and respected each other. At every event, at every occasion, Diego used to give something to his friend as a souvenir.

“Today I am fortunate to have the most important relics of Maradona and I owe it to my father and to Maradona who gave to him all these things. Maybe because he knew my father would make good use of it. “

Says Antonio, Salvatore’s son, who met Diego Armando Maradona when he was a child and enjoyed very exciting moments with his father, Diego and Andrea Carnevale.

Antonio Luise is an entrepreneur in the real estate sector and is a collector of Diego Armando Maradona’s memorabilia. Instead of selling his

collection, he has organized an exhibition of Diez memorabilia. The relics are carefully preserved and guarded by the young entrepreneur from Castelvolturno who has given us a few minutes of his time to tell about his dad, about Diego Armando Maradona and about the exhibition that will accompany the next soccer world cup.

AL – My father has always treated me like a man since I was 6 years old.I’ll give you an example: he gave me a lot of money to deposit in the bank, and I was only accompanied by one of our drivers. He taught me a sense of responsibility. I have always thanked him for everything he has done for me and for what he has taught me. Even shortly before he died, I thanked him again. –

In fact, despite of being a wealthy family, his father taught him the sacrifice. In order to learn Antonio followed his father into the laboratory and started there with simple tasks such as sweeping the floor, emptying the bins … Later he took his own path, different from that of his father. In fact, he does not take care of the family dairy business, which his uncle looks after today. Antonio has always been more interested in the real estate sector. Despite of being the owner of a real estate agency, his father preferred him to do his apprenticeship in Napoli, working at various franchising real estate agencies and starting to learn from the lowest position.

AL – I made many sacrifices. Even if my family has a real estate company since about 1975. My father made me work, for 5 years, for other people. He said that in order to learn at the best it was important for me to start from scratch without recommendations or concessions otherwise I would not have learned and would not have been able to carry on a company as I have been doing for years now. –

At the age of 7 Antonio followed his father into the dairy. Then when he left school he also went with him. And he worked in the dairy laboratory.There are entrepreneurs who, in order to keep incapable sons or daughters out of the family business, preferring to pay them. Salvatore Luise taught his son what work is, a sense of responsibility and sacrifice, therefore, respect for work and workers.Work aside, father and son also shared hobbies and passions. Their relationship was based on a deep complicity.

AL – The love for soccer and for Diego Maradona was passed on to me by my father. Diego was a great friend of my father and my father was same for him. He was offered everything because he was very close to Diego, but he has always been his friend and has never betrayed him.They were like brothers and in his most difficult moments Diego knew he could count on my father. –

This magical bond is firmly held by Antonio who, like his father, has been tempted several times by people interested in the business. Chinese sheikhs and entrepreneurs tried to buy Diego Armando Maradona’s memorabilia but without success. Family affections and memories cannot be commercialized!

AL- Ten minutes after Diego’s death I received a phone call from a sheikh’s lawyer with a crazy purchase proposal. Personally, I have never decided to sell nor had I communicated such an intention to anyone. Believe me in front of such a proposal anyone else would have yielded. But I never thought about selling. – 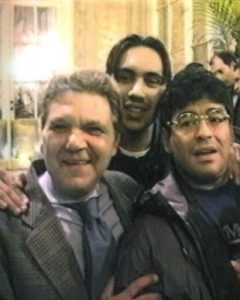 There are 450 relics belonging to the collection of Antonio Luise. He doesn’t sell it. He prefers to show it to the entire world, in a way that will tell about two extraordinary men and their friendship.

AL – We have partnered with some entrepreneurs from Milan and with world-renowned designers and scenographers, who are taking care of the project –

The Maradona exhibition will travel the world for the next 7 years. Dates have already been confirmed in Japan, in Arabia, most likely also in Argentina.

AL – We will do the 2022 World Cup in Qatar. This project is an event dedicated to both. I did everything I could to make it a beautiful world event to show to everyone, young and old people. –

But what will the exhibition present?

AL – Maradona is eternal. He will never end. He is an extraterrestrial. Many associations and companies want to see the relics of Maradona. I have it all. I have the chair of his honorary citizenship in Napoli, I have the tablecloth of his last dinner in Napoli, I have the chair of his dressing room. I have Diego’s first shirt, the one that Diego Armando Maradona Cebollitas wore when he was 8 years old. Not even his brother Hugo believed it. When he saw the heirloom he had tears in his eyes. I could have become a sheikh by selling everything but for me it is much more important to carry the exhibition around the world and keep alive the memory of two great men: my father and Diego. –

Many entrepreneurs consider him a fool not to have accepted such proposals. Maybe Antonio Luise is truly an entrepreneur of yesteryear, who gives importance to certain values such as friendship and also remains an ethical entrepreneur, not a jackal. 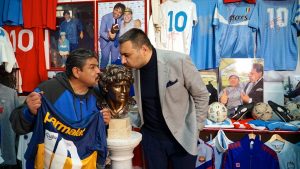 AL – In my case, I think selling is by unfair people. For me it is a pride to carry on this project that I am making with so many sacrifices. It was long because when Diego died, less than 10 minutes later, I received a call from an important lawyer in Milan who wanted to buy the collection. I told him that he was an unfair person and that he was heartless. And I told him that I had never thought or hinted that I wanted to sell. He insisted calling the next day as well. Believe me, it is not easy to give up such proposals! I called back the sheikh’s lawyer and reiterated that he was not interested in the proposal in the most absolute way.Do you know what I reply? He told me: “You have so much courage to reject such a proposal.”I replied “There are things in life that we can’t buy.” –

Antonio has a beautiful family. A wife he loves and two little girls whom he hopes will continue to carry out this project in memory of grandfather Salvatore and Diego Armando Maradona. Since people knew about his collection he is repeatedly stopped in the street by fans and admirers, by fellow villagers or even by simple Maradona enthusiasts who ask him about the museum. They are all happy that he has not sold and congratulate him on being so determined.

AL – For me this is a great satisfaction because there are people who still love soccer, that love Maradona and that are passionate about thehistory of soccer. This happens also because he was a man of the people and he did so much good. He was honest and proud, characterized by great generosity.He made mistakes in his life, but he never hurt anyone. If anything, he only hurt to himself. He has always been a gentleman. Even when he had his own problems, he never refused to play a game for charity, he never refused to help children in orphanages. He was great. He made his dreams coming true from scratch. I believe that in life if a person makes many sacrifices to achieve a goal and believes in what he does, he will certainly reach his goals. My destiny was, for example, to carry on the family business but I didn’t want to because I had another dream. Today I have my own company that gives excellent results. If you put your heart into it and commit yourself, you will certainly reach your goals. –

But Antonio Luise as well as being a successful young entrepreneur and the greatest collector of Diego Maradona memorabilia is also a politician who fights for the territory. He is strongly attached to his hometown, Castelvolturno, which he tries to involve in every project of him. He says that ever since interest was created around the exhibition and the project, he entered the crosshairs of national and international broadcasters and was suddenly catapulted into an extraordinary dimension.

AL – A few years ago Rai (Italian television channel) offered me some locations for an interview. Rome, Sorrento … I said that if they wanted to interview me they had to do the first interview in Castelvolturno, my hometown, which has nothing to envy to any other city.I am a city councilor with a second term. I love my land and I always sponsor Castelvolturno in everything I do. The VIPs always come to Castelvolturno. My city has given me so much. I remember when Diego called in the night and came to eat mozzarella!I believe this is destiny and I believe that my father, who is close to me. He is satisfied and I am sure that he will guide me. I can’t wait for the first day of the event. I’m excited! Now Diego and my father are both in heaven. Maybe joking, as they used to do, while waiting for the first opening of the exhibition. –

Help Napulitanamente to to improve by making a donation. Thanks for your support!

In Nola there is CAM. A Napoli soccer team museum

L’Antiquario. Hospitality, cocktails & champagne at one of the best bar in the world.

Da Alfredo. A Tasty piece of Italy in Japan.